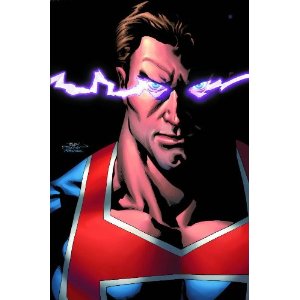 The prodigal son returns with Straczynski back at the helm, and you can tell. The action resumes after Hyperion’s departure. The General recruits four new individuals touched with super powers from the arrival of the alien ship. These four characters were glimpsed at the end of High Command so we get the feeling this is a continuation of an epic tale as opposed to a sequel-for-cash book.

The most intriguing character is Dr Emil Burbank. Every super we have seen so far has physical abilities now we see one with a mental power as his gift is to be the smartest man on the planet. Unfortunately Emil is self centred to the point of being a sociopath yet that doesn’t stop us rooting for him. A human nuclear bomb, an obese man made of silly putty and a woman who can subtly manipulate reality just don’t fascinate us as much as a man who can think his way to achieving any goal – including bringing Mark Milton back into the fold.

Although there is a new artist he does a great job of preserving the existing characters and styles. There are no snazzy tricks to confuse you just excellent illustration. As one of the characters is a quantum physicist this does mean a lot of lengthy explanations which does kind of break the show don’t tell strength of comics but this is kept to a minimum. Yes it’s another Thumbs Up to go on Straczynski’s CV.