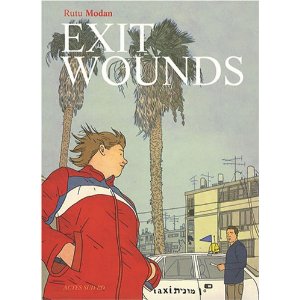 This is a wonderful story that deftly shows you a different culture yet reminds you that we are all the same underneath. A man is told that his estranged father may have been killed in a bombing. Investigating this for himself he learns about the man he didn’t really know and about who he is along the way.

The primary focus is the main character’s journey. Being a cab driver it is a road movie in many senses of the word. He must come to terms with his feelings of animosity as he discovers his father’s new life and the people in it, all of whom seem to know him.

This is set in Israel and the astute reader can pick up a lot of information on its contemporary culture. The book has a lot to say about its home nation but this is all quietly offered up in the background. The complex human relationships are always the centre stage and there is never any sense of an axe to grind or a forced message.

The art is beautiful. It feels less commercial than a Tintin or Asterix book and more grown up than a Raymond Briggs work. Each panel is lovingly drawn and coloured by the author and not part of a commercial production line. This is definitely an analogue work rendered with inks and brushes, imparting an honesty and familiarity that digital output can often lack. All the panels have straight edges on the proverbial grid system and never depart from this. Rather than it seeming old or dated it possesses a reassuring and mature quality. Occasionally a small red arrow will appear to indicate important movement or illustrate a characters gaze. Whilst this is a visual shock it is hard to think of a different way of accomplishing this and any jarring effect is quickly forgotten. The speech bubbles are larger than the lettering presumably as an effect from translating the text to English but this is easily overlooked.

The book ends rather abruptly and you are sure there should be more pages. An understanding rather than a conclusion has been reached and by breaking off in mid flow we still remain firmly attached to the characters and want to stay part of their lives. Had there been a neat finale and all the issues been put to bed then these people would not stay with you and there would not be as much emotional impact. This is definitely the highest Thumbs Up!

Tomorrow: How to Understand Israel in 60 Days or Less – Sarah Glidden