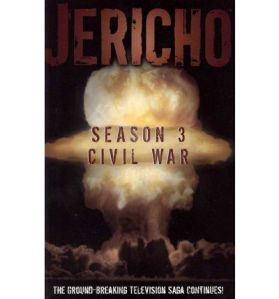 Jericho was a TV series with an interesting premise and storyline. It was cancelled after the first season but fan reaction was so strong it was brought back for a second series before being cancelled again. Presumably fan reaction was strong enough to have it return for a third series but through the medium of a comic-book.

This volume collects 6 issues or episodes that form a mini-series commencing where the last series left off. There isn’t any more as it has probably been cancelled again. The plot does move forward but there is no satisfactory resolution or exciting cliff-hanger at the end. It also derails halfway through as we learn the backstory of the main antagonist “John Smith.”

The art is good and the likenesses of all the characters are good. You can hear the actors familiar voices as you read along. Because of such a large cast the supporting characters get very little attention. It seems a shame to have well rounded and developed characters appear for just a page to deliver a comic line or two. Mind you if they didn’t you would wonder why they were missing.

This isn’t a good place to start with Jericho, check out the DVD’s. If you are a fan and you miss it, and what fan wouldn’t, then this is a very welcome arrival. Thumbs Up!