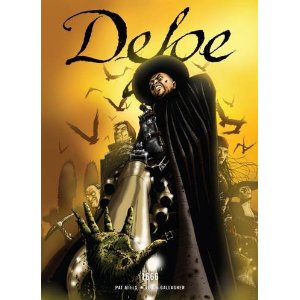 Like much of Britain’s great comic literature this first appeared in the pages of 2000AD and was written by one of its most prolific and well respected writers Pat Mills. Its premise is that in 1666 there was a zombie uprising in England. The great people of the age such as Sir Issac Newton, King Charles II, Robert Hooke and many more familiar names put their heads together to save the day. Science, Alchemy, Devilry, Popery and the drawings of Leonardo Da Vinci are all pressed into service together with a lot of gunpowder. It’s like steampunk but without the steam.

Period London isn’t the background for this story it is the star. The language is a real delight to behold with familiar but long dormant words, phrases, titles and curses all resurrected to breathe life into a truly authentic setting. This is in fact the “Sandman” of zombie comics. You keep wishing you paid more attention at school so that so much of the detail isn’t going over your head. Like Star Wars or Lord of the Rings these pages contain a living, breathing world not just a two-dimensional stage. At the least this will give you a gripping action story, at the most this will have you jumping on Wikipedia or heaven forbid going to the library to look up Levellers, Papists, Linkboys and the Invisible College. As it is written by a Brit there are no jarring Mary Poppins manglings of the language

The art is black and white line that 2000AD is well known for. It is used to great effect here to portray the murk, squalor and grime of 17th Century London. The darkness, rain, fog, underground crypts and oppression of the settings are realised superbly. This is an age before electricity or even gas lighting so all that stands between you and the darkness is your hearth or candle. It is hard to imagine this work functioning as well if it were in colour.

This volume contains the first two of four stories. The second introduces a bigger troupe of zombie hunters and so there isn’t as much time to flesh out the characters. It feels like the ABC Warriors (another Pat Mills creation) with too many faces unnecessarily competing for screen time. You definitely want to know more however and I am looking forward to the next trade paperback. Absolutely Thumbs Up!