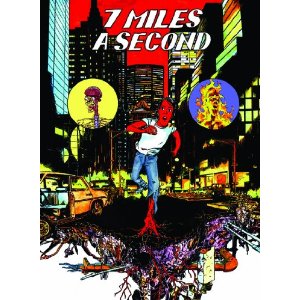 David Wojnarowicz was a writer, painter, photographer, filmmaker, performance artist and activist who died of AIDS in 1992. This work, much of it completed posthumously, is an insight into his life, his emotions and his psyche.

Sometimes straightforward recollection and sometimes surreal dreamscape this is a powerful and visceral connection with another human being. From an abusive childhood to a lingering, medicated death we see the whole spectrum of Wojnarowicz’s short existence. Through his skill as a writer and his poetic prose we also get to feel his life as well.

It has the brutal honesty of Harvey Pekar’s Our Cancer Year; the highly bizarre imagery (both verbal and artistic) of Alan Moore’s Another Suburban Romance; and the tangible suffering of George Orwell’s Down and Out in Paris and London. This isn’t here to entertain or inform it is to make you feel what it is like to be alive. It jangles your emotions like a stick dragged along a fence.

The art is superb with Daliesque fever dream butting up against traditional realism. Imagine Fear and Loathing in Las Vegas the graphic novel and you get a sense of how mind-bending a visual feast this can be. As well as the subjects illustrated the panel shapes and layouts are all used to maximum effect. The colours are superb with the whole thing a hyper-chromatic neon explosion. Lots of white backgrounds pull figures or objects out of time and thrust them to our attention. And while garish and impossibly oversaturated the colours still allow exemplary use of light and shade to create depth and texture.

This is primal, this is visceral, and this is a Thumbs Up!