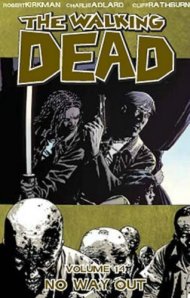 The walls come tumbling down. Quite literally, as the dead congregate on their new home. Just as we think our heroes are going to achieve something akin to normality it all goes horribly wrong. But, as the characters themselves feel, maybe the danger sees them at their best.

There are a lot more deaths which is a shame as some of the new characters were just beginning to get interesting and could have had a pronounced effect on the future storyline. But it is important that there are no sacred cows and that anyone can die at any time. This issue certainly proves that theory with an incredibly shocking page turn. But there is a message of hope as Rick makes a dramatic realisation. The art is great as always, particularly with so many characters to portray. Thumbs Up!

Tomorrow: The Walking Dead Volume 15: We Find Ourselves – Robert Kirkman