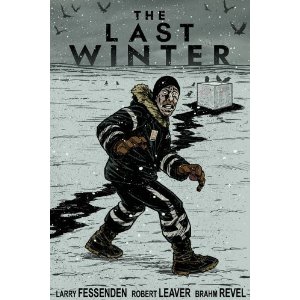 There are many graphic novels that have been made into movies (V for Vendetta, Kick Ass, A History of Violence) but very few that have gone the other way, being movies made into comic books.

This is the graphic novelisation of the low budget indie horror/ drama The Last Winter. It concerns a remote oil drilling operation in Alaska and has a strong ecological message. It was constructed by the film’s storyboard artist Brahm Revel from an early draft of the script, meaning there are solid differences between this and the film.

The art is really good and once you get over the shock of seeing Ron Pearlman in comic book form you settle into it effortlessly. The colours are black, white and grey but there is also a very pale blue (a glacial blue) too. This is used sparingly for ice and snow and sky and the odd highlight. All the indoor or nocturnal scenes are just black and grey so when you suddenly pop outside or look out a window you get a nice visual jolt. There are a couple of speech bubbles from angry characters that instead of containing words the artist has just scribbled furiously, which is an excellent idea.

It is good. I enjoyed the film and it’s nice to see the tale told in a different format, but I was concerned too much was given away removing much of the mystery. Definitely a Thumbs Up, especially to the artist.