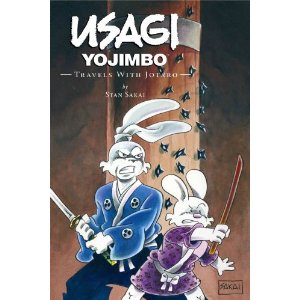 They say never work with children or animals. The idea of a whole volume featuring a child who is actually an animal (Usagi’s “nephew” Jotaro) might fill some readers, and writers, with dread. Fortunately Sakai has a gift for portraying children and Jotaro is only as annoying as absolutely necessary. Whilst he fulfils the role of all children in literature, to be kidnapped and ask awkward questions, he does not overshadow events.

This volume is a good excuse for Usagi to introduce Jotaro to some of the people he has met on his travels and to recount some of the hard learnt lessons of his own youth. Sakai has created quite a large supporting cast and it is testament to his skill that he uses them judiciously. They aren’t simply vehicles to deliver plot to Usagi. You very much get the sense that Usagi is there by chance and if he wasn’t around then those characters would probably solve their own problems as they have been doing since he last met them. There are some new adversaries introduced and you get the feeling there will be trouble on the road ahead.

The tales in this work get steadily more supernatural but are handled with skill and still maintain an air of realism. Whilst the final battle features a Godzilla-style giant monster showdown even then everything happens for a reason. You have to admire any writer who can have you trembling at the idea of a haunted paintbrush. The art is excellent throughout as always and the children have a real energy and dynamism to them. The most incredible Usagi drawing appears on the table of contents for this volume and is not part of a story. It is what Usagi would look like if he were ever possessed by Jae-san. That demonic grin is really chilling and you pray you will never see it again.

Absolutely a Thumbs Up!