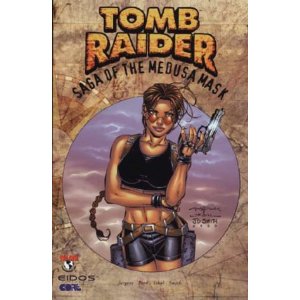 It’s an exciting prospect to see the highly successful Tomb Raider franchise in a different medium. It turns out adapting it to comics is harder than you would think.

Solitary exploration and beautiful ancient architecture are gone in favour of James Bond action sequences and a stereotypical English butler/ sidekick. There is a bit of swimming and a bit of running and shooting and a disappointingly incredulous treasure to drive the whole thing on.

Effort has gone into it as there is a backstory for Lara, a twist at the end and a troubled romantic entanglement. But Lara is an English girl (aristocracy actually) designed by an English computer games company. If you give her to an American publisher then you get the whole “submarine designed by someone who has never seen the sea” affair. There is no “U” in Falkland Islands and no Brit would use the word “sugah.” Yes that’s how they spelt it. It’s Union Jack all over again.

The art isn’t bad. It has that youthful Image/ Wildstorm look and some of the covers are very faithful depictions of Lara. She is well proportioned and decently clothed too. There are some nice underwater scenes and a flashback that uses green and grey as its primary colours that is distinctive and effective.

If you are an international reader then it won’t seem too bad but for the British audience it No Thumbs today.