This month there were no Thumbs Down titles.

There were also zero No Thumbs titles.

We had twenty five Thumbs Up titles.

This month we had six Double Thumbs Up titles.

Another month bites the dust and with two big series eating up my days it has flown by. Powers was awesome but Ex Machina seemed to wander of course and didn’t sustain its terrific start. It is good to see another strong Crossed title finally.

My star was  undoubtedly Wimbledon Green that proves you don’t need fancy tricks to tell an engaging story.

See you next month when I will make the move to double figures with less than 100 books to go. 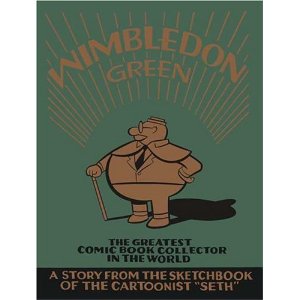 This is a wonderfully subtle and gentle meditation upon nostalgia and the human condition, with a gentle fun-poking at the world of comics and collecting things.

It is a series of short strips – some very short – that builds up a picture of the titular character, “the world’s greatest comic book collector,” Wimbledon Green. Through descriptions by others, and occasionally personal appearances, you get to form a picture of this eccentric figure. The storytelling is superbly crafted and at points you feel like the gumshoe of a film noir interviewing witnesses to try and find this missing figure. It feels like Andi Ewing’s “45” but with a different visual style.

This is drawn by a cartoonist and it has the black and white strip feel that has populated newspapers for decades. Most of the panels are shaded in a single colour (but with a couple of hues) and this brings a lot of depth to the page. The colours used are bronze, silver, and gold, or more precisely their matt equivalents, to represent the three ages of classic comics. Many of the pages are talking heads with panels little bigger than a postage stamp as characters relate anecdotes about the mysterious Mr Green. Although almost identical the odd blink or sideways glance reveals a lot about the speaker and the tale they are telling. The whole thing has a quite a stop motion feel to it. There isn’t a lot of visual trickery but a change in the frame size or unexpected variation in colour really packs a punch. The “less is more” has never been truer than here.

It is astounding what can be achieved with a simple idea and subtle execution of some universal themes. This is a very quiet and sophisticated work despite its simplicity. The hardback format is expertly used and the production values are extremely high. No question of anything but Double Thumbs Up! 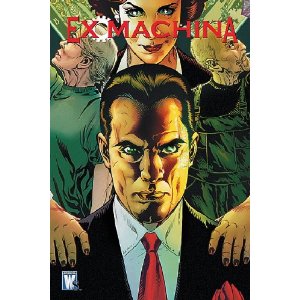 Where will it all end? With all the twists and turns of the previous volumes will this have a satisfactory conclusion? Or will it end up with the wacky finale that Y: the Last Man did? It’s both.

There is a dramatic conclusion with twists, turns and shocks that really grips you. Then it descends into a Return of the King style epilogue-fest as if Vaughan changes his mind and doesn’t want to let things go. Or maybe wants to finish things in a terminal fashion and move on.

The art is disappointing compared to the wonderful colours we have seen previously. Much of the book is murky and the clean lines disappear in places as if someone else has been filling in. The wonderful faces and expressions are still there but little else that stands out.

The series peaked long before this volume but you care so much about the characters you have to stay till the final curtain. For this reason is just scrapes in as a Thumbs Up! 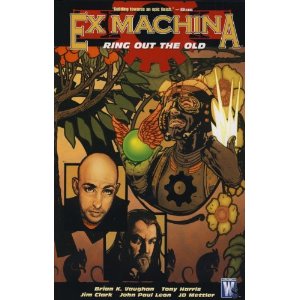 It’s true. Vaughan has finally gone bat-shit crazy. He has put himself in his own comic. Not the “author insertion fantasy” of bad writers everywhere but as himself with his own likeness as a real person. He has taken his artist with him too, and now they are talking to his fictional characters about real events.

I don’t think “breaking the fourth wall” is a strong enough expression for what occurs here. He may be ahead of his time or completely off his rocker but there is one moment where both the fictional and the autobiographical are so perfectly balanced you begin to doubt your own reality. The story within a story spirals off into the abyss and Vaughan looks right back at you.

It is clever but maybe such theatrics should be on the stage and not derailing a graphic novel. Vaughan would probably be better off with a newspaper column as he declares himself the Jeremy Clarkson of NYC and abandons satire, allegory or parody for poetic ranting.

But that is only the first story. The second is another one-shot, with a different artist, which is an environmental message with a dig at other people’s comics. Then finally we get down to the main story, which is a tense and taught affair concerning a McGuffin that should have been introduced at the start of series if it was to have any credibility. The whole thing then melts into sci-fi psychedelics.

It does feel like he is making it all up as he goes along, or got bored ages ago and is messing around until he gets fired. Yet the characters and the story are so compelling we can’t tear ourselves away from this hand-basket to hell.

The art is familiar and comforting yet lacks the previous sparkle seen in earlier volumes. Even the replacement artist does a good job with the characters without aping Harris’ style.

Thumbs Up, but I am not sure for how much longer. 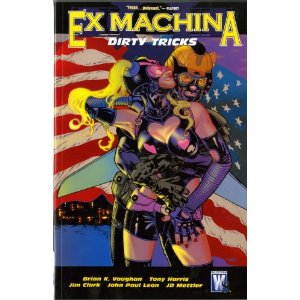 They say you have to take the rough with the smooth and right now things are getting a bit bumpy. First we have a single issue story that isn’t really sure what it is saying but it seems Wylie has to have solo-time as every other character has done. We also finish with a single issue story that doesn’t do a bad job of filling in Mitchell’s blanks. The middle story is an odd one but rather human compared to the previous divine and alien themes we have explored of late. It dances about all over the place packing in a lot of mini-plots and ideas but leaves you feeling rushed.

This is the first volume where the art does something different. In the main story has its usual brilliant high standard with a particularly noteworthy dusty 9/11 scene. But the lettering changes font making it a distracting read. The first tale is all talking heads, cramming too much dialogue onto each page. The final part is drawn by a different artist. Whilst it reminds you how lucky you are to have been enjoying our usual talented team it shows you that the words and themes are what hold your interest in Vaughan’s work.

Despite some odd creative decisions the seeds for the finale are being sown and you know you won’t want to miss that. Thumbs Up! 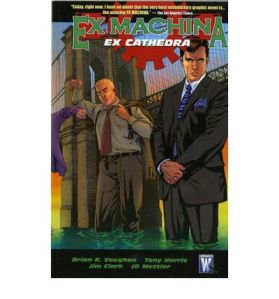 If you thought last volume’s visitor from beyond was strange wait till you see who Mitchell goes to visit today. I guarantee you won’t believe it. But you have to trust Vaughan. This is a snappy little thriller but feels very much like a diversion from the political meat and drink that makes Ex Machina so great. There is some wonderful dialogue however and you really can’t predict what will happen next.

It would take a change of team to make this anything less than artistically brilliant. You can see everyone is at the top of their game, but they aren’t taking risks. They are clinging on to their winning formula.

There is a second story concerning Commissioner Angotti offering us a peek into her life as we have seen with Bradbury. On the whole this does feel a little disjointed and even padded as we constantly skip back to scenes that don’t seem to move things forward. For the ballsey guest cameo this leaves with a Thumbs Up! 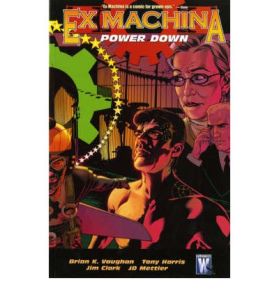 We are so used to the fantastic political content of this amazing title we forget about its sci-fi component. Well not this time as crazy out of this world shit hits the fan and really mixes things up. Being mayor of NYC and an ex-superhero isn’t enough now we have a visitor from… someplace else.

The art is excellent and the colours spectacular as always. Never has a colourist made such an impact on me. This issue seems to have even more shine than the last with lots of attention to detail and some amazing faces. The lighting gets a lot of care and there are some wonderful scenes. There is also the most noticeable digital effect to date, an in your face motion blur which seems both comedic and out of place.

There are long explanations by both the writer and artist about their creation process and twenty pages of step by step examples of page and cover creation. It is a joy to see how much detail goes into the original pencil art. 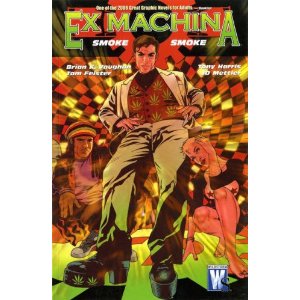 The latest issue that Vaughan tackles in his on-going political drama is Drugs. But rather than being just a trite topic-of-the-week this has real depth and thoughtfulness to it. There are also some tantalising sub-plots being introduced and a twist that will leave you reeling. This certainly feels highly polished.

The art is top-notch as always. There is a second brief story where Bradbury’s life flashes before his eyes in a superb series of revelations.

This is a strong Thumbs Up! 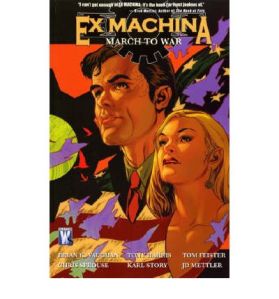 This contains two stories. The first, March to War, allows Vaughan to use his talent to elegantly introduce global politics into the mix. This is an excellent story that reminds you that, in conflicts there are very few winners.

The second story, Life and Death, reveals the character of Pherson that we have heard so much about. Unfortunately this arrival is telegraphed before the story setting any impact up to fail. The story is too short and resolves the episode too neatly sabotaging future potential. This is an opportunity lost and quite a contrast to the superb lead story.

The art – or rather the colouring – is fantastic. Absolutely fantastic, with bold choices being made. The tonal washes go into overdrive and despite having a very unnatural feel they work superbly. There are some panels that use alternating colours for the two sides of a phone call that really pop out. 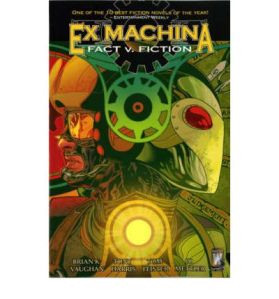 This volume contains two stories. The first is a whodunit, or maybe a whatdunit, similar to the snowplough incident of volume one and the second is a rather surprising family story with a dramatic revelation about Mitchell’s parents. This is the superior tale and shows just how masterfully Vaughn can instil emotion in his readers.

The art is good and seems to be getting a bit more time or polish, or maybe Harris is finding his groove with these characters. There is an interesting visit to a comic shop that seems to be populated by the works of just one man.

A gentler piece but still a fine Thumbs Up!