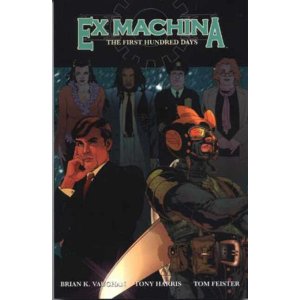 The world’s first and only superhero gives it all up to go into politics, becoming mayor of New York, and inherits a whole new set of problems. The story skips forwards and backwards in time showing you both his career as a superhero and that of a newly elected mayor. This gets you straight into the action and gives you twice as much excitement at the same time.

There is politics, racism, current affairs, ethics, as well as mystery and excitement. Both the story and its method of delivery are top notch. There is a diverse range of believable characters as well as a large dollop of social commentary. This is American and the international reader may have to Google a couple of the contemporary and historical figures being bandied about. It is a clever and intelligent work that makes you jog to keep up but won’t leave you to fall behind.

The art is solid stuff but the colouring is bizarre. It has been digitally graded and each scene has a particular coloured tint to it. Sometimes the whole page is done and sometimes just the background making the characters pop out and giving depth to the whole thing. In isolation this looks peculiar but as a whole this tonal wash is very effective with some wonderful blue-green night scenes.

There are seven pages of behind the scenes art showing that each panel is posed by actors, photographed, pencil traced, inked and then coloured. This is quite an unusual process and a real learning experience to view.

Because I can’t find fault with it, and can clearly see why it won a whole bunch of awards, this get the coveted Double Thumbs Up!