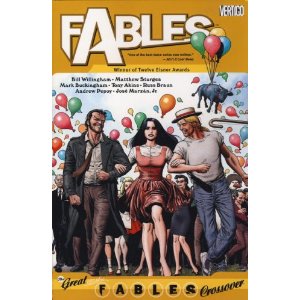 It’s a crossover which is just a big scam to con money out of you by making you buy comics you don’t want and leaving you confused about who these characters are you have never met.

But this is a Fables Crossover which actually means that it isn’t too bad. It primarily crosses over with Jack of Fables which is the spinoff miniseries following what scrapes Jack has got himself into since leaving Fabletown. And it is good to have him back. He brings his unknown retinue with him which whilst confusing does intrigue you enough to want to check out his series.

There is a massive “end of the world” threat which is quite a unique one and features a lot of comics and literary in-jokes. Unfortunately this does interrupt the previous “end of the world” threat that was just kicking off last issue making the whole thing look rather farcical. Which maybe is the point. The fourth wall is broken but as it is largely Jack doing it we forgive him.

The art is top quality stuff with multiple artists. However all are working hard within a shared style so you could easily believe this is Buckingham all the way.

Despite the confusion and the ditching of sincere emotion for clever literary gags this does get a Thumbs Up! Now back to the real Fables.