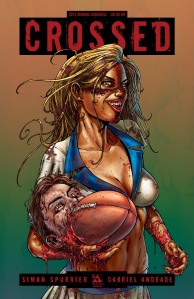 This is a single issue piece written by Si Spurrier who did an excellent job with the Crossed: Wish You Were Here storyline. It is self-contained and doesn’t crossover with any of the storylines to date.

Its central character is Scottish and is written in the Scottish dialect which whilst admirable in its diversity makes it bloody hard to read thus slowing things down considerably as he is pretty much the only person talking. He is a soldier and unfortunately trite convention dictates he must come from the Special Forces (SBS) and we must mention the Falklands War.

The story ends in a weak twist and like most stories could be told without any Crossed being involved whatsoever. We do see our first foreign Crossed, swearing in Icelandic, complete with comical subtitles however.

The art is good with another artist new to the franchise but mastering the long established style. As our lead is completely bonkers there are a lot of imaginary gribblies creeping into the frame in a similar way to Crossed: Psychopath. They aren’t as bizarre as Lovecraft’s or as elegant as Dali’s but fun none the less.

It’s a Thumbs Up because it isn’t the worst Crossed story, not for any better reason.