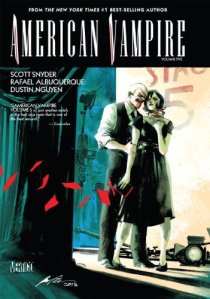 This book contains three stories. The first is Snyder’s take on the granddaddy of all vampires, Dracula. This is executed very well as he finds his own path rather than messing with what has gone before. It is a good chase/ road movie with some of the secondary characters we have taken a shine to.

This story is illustrated by Dustin Nguyen who briefly exhibits his own style before coming into line and adopting the Albuquerque template. There are a lot of neat little artistic touches and some lovely sketched flashbacks. Even the lettering for foreign languages has some good ideas.

The second story concerns Pearl and what has happened following the attack on her home. This is a top quality piece of writing showcasing the emotions and relationships Snyder has a knack for. Where Pearl is, Skinner isn’t far behind, but he does feel criminally under, or even ill, used. The great thing about vampire stories is you get to bring people back from the dead. But do it too often and death loses its punch.

The third story is a one-shot that works as a fine interlude between bigger stories and dusts off some previous characters ready for a future storyline.

Albuquerque draws the second and third stories and his style has come to define the wonderful look of American Vampire. There are few surprises in his work but we like the comfort and dependability of his craft.

Overall this isn’t a bad volume. Snyder does historical America very well and being set in the 1950’s this leads to the great line of “undeads under the bed.” There is enough topical material to give you a sense of place and as the stories reference each other you do get the bond of a cohesive world. Unfortunately Snyder doesn’t do so well outside the US and adventures in Britain and Europe exhibit some clangers. Some are partly conceits to smooth things over for an American readership but Gaelic is an adjective describing a language or culture not a noun for a person or nation. Small things.

There is a sketchbook at the back and variant cover gallery too.