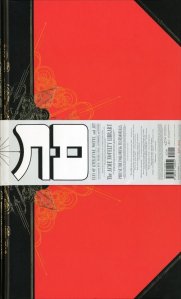 Bloody hell! This isn’t your usual comic that provides entertainment or escapism. This is an alternative comic, an art comic, a muse on the human condition, a work of pictorial philosophy, and an unkind mirror for our souls.

The book is 23cm x 38cm. It is a massive hardback tome yet the majority of the text and panels that appear are tiny. A lot of them smaller than your thumbnail. The strips are never more than a page long and at first glance are nonsensical. But a deeper look detects a small comment or theme usually decrying man’s destructive, petty, uncaring nature. Some of them like “Rusty Brown” – an action figure collector – have a recurring character we can identify with, and deplore and pity in equal measure. Even his life isn’t presented in order so we have to work out where in his timeline he is.

Along with cartoon strips there are also fake advertisements for ethereal concepts such as art, contentment, and big wide open spaces. These are done in the style of classified adverts that have been seen from the nineteenth century up to the present day. The star of the show is the inside cover of “fabulous prizes.” An almost perfect reproduction of the novelties on offer inside every comic book when you were a kid, yet skilfully twisted into a brutal statement about the Western world and its poor treatment of developing nations.

There is also a fictitious history of the Acme Novelty Company with fake depression-era photos. It is a bone-dry filibuster designed solely to suck time from your life and make you realise how much of your time is wasted, even in this digital information age we live in.

Even though you won’t, there are plenty of cut out things to make – as if you would risk tampering with this work of art. Little flick books and miniature playhouses and the kinds of things that would amuse children in simpler times.

This is a long read and once you get the idea you may be tempted to skip over large chunks of the text based pages to find something more accessible to you. This work will stay with you. Not as a moving, emotional experience but as hollow void that nihilistically echoes the failings of humanity. Or thereabouts. Maybe just a nagging thought of “what did it all mean?”

A true labour of love and a valuable work of art.