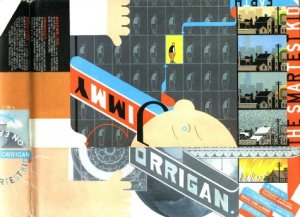 The episodic nature of its origins presents a series of scenes or tableaus without commentary or judgement but with brutal honesty allowing us to see just how painfully uncomfortable relationships and familial interaction can be. There is a bit of monologue or narration but usually we are left, just as with real human beings, to puzzle out what is going on for ourselves.

You can sense Ware growing as a writer as it is not until the last third of the book that he really discovers just how poignant and moving this medium can actually become. There are some of the Ware trademarks such as cut outs and fake instructional manuals but these are rare.

The art is more illustrative than cartoonish. With a limited palette and limited dimensions (but good perspective) he creates his own distinctive style. Everything is very tidy and deliberate with no sketching or rough textures visible. He also loves tiny panels and tiny lettering which can slow you down as you are forced to stop and squint. Ware also develops his own visual vocabulary using different styles and colours to indicate memories, thoughts and even exposition.

This work relies on the reader working hard and investing in something that is more art than literature. But it is just as easy enter this story if you have never read a comic as if you are fluent on what has gone before.

This is a real labour of love that deserves a Thumbs Up!