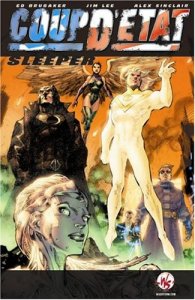 The Authority has always been about pushing boundaries. About thinking bigger. But not even Millar and Ellis thought about deposing the United States government. An idea both genius and frightening.

This book is a series of one-shots from The Authority, Sleeper, Wildcats, and Stormwatch: Team Achilles that covers this event. If you are only into one series then your particular issue will do you just fine. If you want to know about the wider picture then they all add more detail to the plot. The big disappointment is Sleeper which only exists to kick things off. You don’t get any clues on who these characters are or any reason to want to know more about them. Such a waste of Brubaker’s talent.

The star of the show is actually the Wildcats issue. Even knowing nothing about this title the questions it raises and their response to the Authority’s action is the most intriguing. No one is backing down here. You have always followed the Authority as “the good guys,” or at least anti-heroes. Now this book cleverly makes you question that. How far is too far?

There are four different artists here and it is right they should stay true to their books. The differing styles, whilst interesting, do break up the flow. Rather than a unified whole this does serve to keep things separate with each title and its characters having a cameo of the week feel.