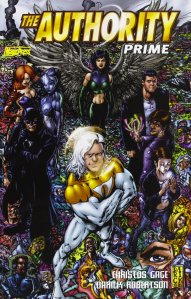 Stormwatch and The Authority turn up and fight each other over some old Bendix hardware before teaming up to fight the man himself. Or his hologram. Or his clone, Or his A.I. Or whatever the Bendix of the week is. Didn’t the Fantastic Four do this in the 1960’s?

Gage has done some good and some bad work. Despite the hackneyed plot and blatant sequel bait this isn’t without redemption. If you can remember the original Stormwatch, with Lamplighter et al., then there are plenty of hidden gems for you. Otherwise this is a six issue fight scene with constant jabbering. Whilst there are clever twists and some jeopardy it isn’t a taxing or meaningful read.

Robertson puts a lot of effort into livening up the fight scenes but outlines can feel too heavy at times. There is good lighting and adept panel structure but it’s all about the words and not the pictures unfortunately.

There is also an irrelevant use of the Cthulhu Mythos as an opener. Clearly Gage has either never read or understood Lovecraft’s work.