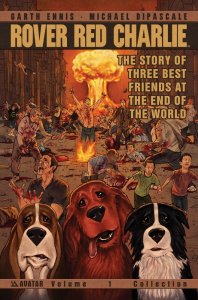 It’s the end of the world as we know it… but from a dogs eye view. More than just Crossed meets Watership Down this is one of those old Disney films like Homeward Bound but updated. Pride of Baghdad by Brian K. Vaughan is the closest comparison here.

This is a satire of our world but Ennis seems to eschew Orwell’s anthropomorphism and delve deeper. He takes the time to understand and show us just how the world appears to a dog and several other animals too. Is the technology and sophistication of human civilisation really preferable to canine freedom?

The wonderful thing is the language. How much vocabulary does a dog need and where does it come from. Looking from a literary and etymological point of view Ennis really hits the nail on the head and is key to making the canine characters plausible and endearingly engaging.

Ennis is not known for his subtlety and there are some visceral punches for any reader who hasn’t grasped the fact that two legs are pretty abominable. The last chapter is incredibly dark and it is arguable that we could take home the authors message without such a polemic delivery. But you sure won’t forget this story or its themes in a hurry.

The art is perfectly suited to the subject matter. The matt colouring has a really analogue feel to it. Dogs are dynamic and energetic creatures and Dipascale captures the feeling of motion that is a necessity in telling an animal’s story.