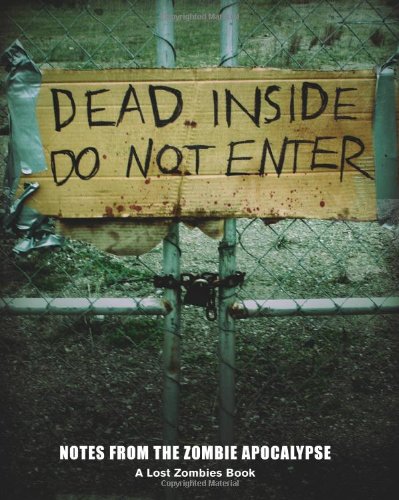 This isn’t a graphic novel no matter how thinly you stretch the definition. It isn’t telling a narrative story but it is painting a picture and building a world through pictures – pictures of text. Think of World War Z done as Post-It notes.

It’s a ‘found footage’ zombie book. I guess that would be ‘found writings.’ The premise is this is a collection of scribblings found by the survivor of a zombie apocalypse who has gathered them up through the outbreak. Most are single notes but sometimes you can spot more than one from the same character.

It is more of a tone poem and an exercise in atmosphere building, or depression generating. Things are quite bleak and there isn’t a defined structure or resolution, happy or otherwise.
It’s a great idea particularly as this was a collaborative effort from lots of different participants. Effort has gone into making each piece of paper, from lined stationary to the back of a flyer, different and realistic.

But if you look too closely things unravel. Many of the articles written are actual thoughts that would probably enter people’s minds but they would never write them down. You might discuss these feelings in conversation but why would you put them in a note, presumably to yourself. Most are hand written but you can tell some are a computer generated font pretending to be handwriting. There is also a text message exchange. Who got hold of both parts of this conversation and why did they print them out individually?

It is a wonderful idea. It is a fine piece of collaborative art and storytelling but just not that entertaining. There is an artificial timeline, presumably that each writer used for their contribution.

Thumbs Up for the idea.