This volume is a proper pulp noir. It has the hardboiled detective narrating his tale and drinking his way through a mystery that twists and turns like a snake on a carousel. There is a connection, a briefcase and an appearance by our favourite Agent but it feels like a standalone story.

The obligatory first person narration is highly polished and packed with wit and clever linguistics. It is chock full of “dames,” pervading both the art and the story. Whilst they are part of the territory Azzerello works hard to ensure they aren’t just plot signposts, although can feel a bit too disposable.

The art is great as always and works to capture that noir feel. The colouring is top notch too but both aren’t the best you have seen in the series.

It is solid but seems too disconnected to form part of the mythos despite using established characters. 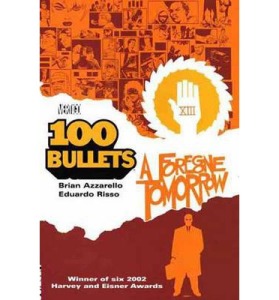 This is a massive volume, the largest in the series, and it contains six separate stories. Pretty much everyone you have met so far pops up in one way of another and you learn a big secret about the Trust too.

There is no reason why this could not have been two volumes but as the stories are quite short and bitty you are probably glad it wasn’t. This volume sees real history mixed with the fictional conspiracy and that makes you feel a bit uneasy in places. You do get more answers than new questions though and that certainly helps.

The art is great and there is one tale, that acts as a recap of the story so far, which has ten guest artists doing portraits of the characters. These include names such as Frank Miller, Jim Lee, and Dave Gibbons. The beauty is in the details and we see multiple stories running separately on the same page and even in the same panel making for a highly sophisticated read.

Patricia Mulvihill returns as colourist but although she does an outstanding job she doesn’t get the opportunity to produce the jaw dropping vistas she did on the last volume which is a great shame.

A good read and certainly a Thumbs Up! 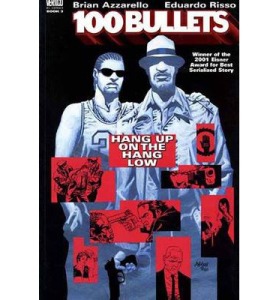 The best just got better. Assuming that is possible. This contains a single story that focuses more on the people than the bigger picture.

The narrative is superb, the characters are diverse and well realised, the dialogue is spot on and the ending is definitely eyebrow raising. Agent Graves just gets more complex by the issue.

The true star here is the colourist, Patricia Mulvihill. From the very first page the colours look richer and snappier. Not necessarily what you would think appropriate for a noir thriller but expertly done. The lighting effects, the shadows, the colour casts, the whole nine yards is jaw-dropping. This is some of the best I have ever seen. Although digital it has such an organic and tangible feel that you think it is real.

It is a wonderful work on every level that will be almost impossible to top. Double Thumbs Up!

The man with the attaché case returns. We get some more stories of revenge but we also delve deeper into the conspiracy. We learn nothing, or if it is possible, less than nothing. Nothing that we can rely on. You get to see more of Graves in action and thanks to Azzerello’s wonderful character building it is terrifying.

Azzerello is like a watchmaker. Dozens of tiny details are pressed intimately together to make a spinning, dancing whole. He is a wonderful storyteller and you just sit there open mouthed, reading as fast as you can to try and keep up and desperately find out more.

The art is superb and Risso puts so much more into every frame than anyone else would. You can see the stories of everyone in a bar just by peering into the background as the foreground action unfolds. What would be dressing for most artists comes alive and sucks you in.

With several pages of dialogue in French and no translation it is clear Azzerello is one to take risks. From the complexity of his story and lack of pandering to the lazy reader we also see he isn’t going to compromise on what promises to be an amazing vision.

Tomorrow: 100 Bullets: Hang Up on the Hang Low – Brian Azzerello

This is very good stuff. Modern crime drama with a noirish twist. Reminiscent of Ed Brubaker’s Criminal series but with a grungier, baser feel to it.

There are three stories that get progressively shorter. Each is a mini masterpiece until you realise the connection and then you are hooked. The secret of the 100 Bullets is deftly handled and definitely leaves you wanting more. Azzerello builds real suspense and tangible menace too.

The dialogue and setting tastes authentic and whilst all the gangsta speak can make your head hurt it is worth persevering with to immerse yourself in the situation. The twists come out of leftfield but you never feel cheated. Although short stories there is a huge anchor to what will be a massive bigger picture.

The art is excellent and spot on for the feel of the story. It has that classic Vertigo newsprint feel to it. The soft matt paper yields deep colours, the panels are very informal and there is a lot of shadow. The silhouette is king and the darkness shows you more than the light.

There is no way I can wait till the next volume so it has to be the Double Thumbs Up! 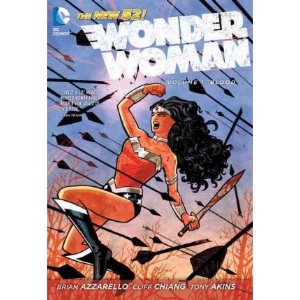 This is what they call a turn up for the books. A mature and sophisticated story without any spandex.

Although it features Wonder Woman, and she is our primary guide through the narrative, a single lassoing and bracer parry doesn’t make it feel like she is indispensible. It is more about the machinations of the Greek gods – whom it turns out Diana has more of a relationship with than you thought – and notably Zeus’ rampant promiscuity. Poseidon, Hades, and all your favourites from Clash of the Titans are here but you don’t need a major in the classics to eventually work out who is who.

The whole thing feels, and also looks, very Sandman; from its immortal characters and literary references to its particular art style. The Greeks certainly knew how to spin a good yarn and using established myths to craft a tale with modern resonance all about family is sheer genius. There aren’t many laughs but they appear where appropriate. Drama is king here.

There isn’t too much characterisation or lengthy exposition. You begin in medias res and the whirlwind of people you meet usually appear cryptic or reserved. This gives a great feeling of ‘trust no one’ as there is both a child’s life and the throne of heaven at stake. There is a human character for us to latch on to who, despite being the maguffin that drives the plot along, is a genuinely likeable, witty person that we can easily take a shine to.

This being an origin story and part of a reboot we do have bases to cover so there is skipping between heaven, earth and the secret Amazon homeland along with dramatic revelations and re-revelations about back-story. The Wonder Woman here feels nothing like the Diana of JLA and there is certainly no mention of Captain Trevor.

The art is great and much looser and more abstract than most clean lined superhero books. The colouring is out of this world and the lighting of each scene, and the mood that creates, is epically cinematic. Each location and time of day feels distinct and great use is made of twilight and rain. There is an incredible transition between pure blue and pure red panels that you could frame and hang on your wall. Most of the earthbound locations are in London and if you can forgive the stereotypical accents it’s nice to see Tower Bridge and the Thames make an appearance.

This is really good storytelling. It has universal and poignant themes, an emotional heart, and isn’t dumbed down. It benefits a second read and it really seduces your eyes. It’s not a traditional superhero story and is unexpectedly broader than just a Wonder Woman story but doesn’t disappoint.

The hardcover edition has a sturdy matt black cover under the dust jacket with plain embossing on the front and spine. There is the original concept art for many of the characters. Each of the issue covers also features the original black and white proof too.