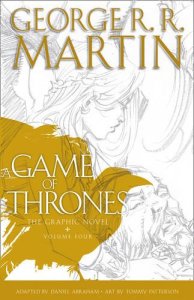 This is the final volume in the series and all does not feel quite right. While there are many detailed panels you get the feeling these are becoming rarer. Maybe time or money or other jobs forced more plain, bland backgrounds. Things do feel sparse toward the very end. It isn’t a major blow and there are definitely some lovely covers to keep you interested.

The special features is the artist talking about how he created the main characters. This is good advice for any budding artist and there are lots of examples too. Most interesting is his artistic method which is very classical indeed.

I hope they do more and they continue to be a Thumbs Up! 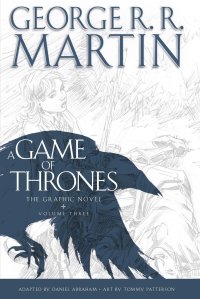 This is the third and penultimate volume of the set. It continues the same majestic art, opulent colours and spelling mistakes.

The story is paced well with lots of detail from the books including names. The vast cast of characters are all given different looks and in the special features there are the character sketches of dozens of individuals making this a remarkable work.

A fine volume and a worthy Thumbs Up! 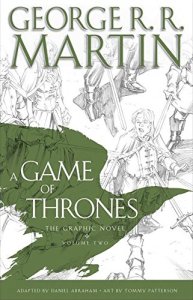 Here is the second part of this lavish adaption of the Game of Thrones novel. Everyone is getting into their stride and growing more confident and capable. This means less typos.

We also see this volume diverge from the TV show more. There is a marvellous ascent to the Eyrie that would have been cut from TV for budget and you would have thought would disappear here due to length. But it appears in all its glory. This level of micro-detail is as surprising as it is welcome and makes the world richer for it.

The hardback format returns and so to do the special features. If you have any inclination to create comics, in whatever role, it is your duty to read this. In this section we look at the entire transition process to the text of the original novel, through all the different stages, to the finished graphical masterpiece. Invaluably we get to see the creative discussions and see what techniques were tried and rejected. This peek behind the curtain is an anathema to many creative people so we are really privileged and can learn a lot.

The art and colour is sumptuous with each issue representing weeks if not months of work. Backgrounds are impossibly detailed and faces and heraldry receive superb attention. The boxes of narration are keyed to certain characters, just as they are in the source material, but black on red or black on brown is never a good idea.

This is another delightful volume that makes a good stepping stone for those who want more than TV but aren’t quite ready to give up their pretty pictures. 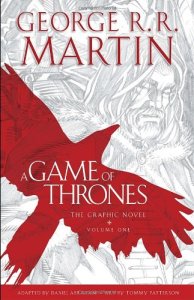 This is the first six issues of a twenty-four issue adaptation of the first book in the Song of Ice and Fire Series from George R R Martin.

With the original novels and the successful TV series why would you need essentially a hybrid of the two? Reading this it isn’t yet clear but this is certainly as well executed as either of the other media. The majority of editorial decisions match the TV show so you are gaining some additional dialogue here and there. This is a great read if you don’t want to watch the TV version again but aren’t ready for the novels.

Being a literary format however we can have narration, flashbacks and internal thoughts allowing us a deeper look into the characters themselves. You can also read it at your own pace allowing you to digest the concentrated history and plethora of character names.

The art and colouring is fabulous. You can see there are hours of pencilling on each page and every background is rendered in full detail. The colouring is rich and lavish as appropriate to the regal locations. Initially it can be hard to tell several bearded men apart but as you read on the characters do flesh out with their speech, bearing and mannerisms. There are a lot of speaking parts and a lot of hard work goes into making everyone memorable.

There are some typos in the lettering however. Initially you aren’t sure if it is Martin’s world but in one issue there appear to be three jarring mistakes (pay instead of pray for example) and this is a shocking let-down.

The hardcover with its delicate embossing and stylish dustjacket ramp up the production values but it is a shame there is no page marker ribbon. There are dozens of pages of extras describing the start of the project by all the people involved including the commissioners and editors. What is really refreshing is how humble they are and how willing to share how much they have learnt on this project too.

A very opulent Thumbs Up!