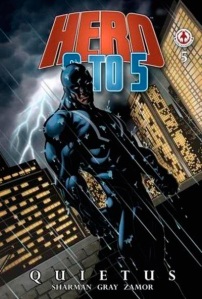 This is what you get is you cross the Carry On films with superheroes. Whereas the last volume had a lot to say and quite a bit of heart this doesn’t. It is like the shameless cash-in sequel. It isn’t bad and will make you smile and laugh while playing spot the pop culture reference but it is definitely a vanity project. This is the kind of thing that makes a great free web-comic. You will enjoy reading it but might object to paying for it.

The art is just as delightful as the previous volume. Garish and bombastic in the best way possible. There is talent and enthusiasm and it complements the bawdy nature of the piece perfectly.

If it were longer it would make more of an impression but in the shadow is its superior predecessor there are No Thumbs today.

You would think there is a limit on how much you could cram into a four issue small press title wouldn’t you. Well you would be wrong. This has everything. Drama, comedy, romance, satire, pop-culture references, social commentary, action, politics, parody and feel good message all stuffed into a tiny space.

The premise is that superheroes are a fourth emergency service. If you need them you call on the phone just like the police. Trouble is you get what you pay for and if you can’t afford it you have the government sponsored “free” heroes who are at the bottom of the heap. Heroics have become just another 9 to 5 job and the people at the bottom of the pile are getting screwed.

We follow Jacob Reilly, aka Flame-o, a low grade wage slave hero working for the government. He gets to save people (or fails to) because that is what he is paid to do. Unhappy in his work and with the system in general, his life goes from bad to worse when he starts dating a neurotic villainess. It’s kind of The Authority meets Benny Hill.

There is so much shoe-horned in here it can feel a bit too concentrated, like undiluted cordial. The gags and references are almost tripping over each other so you don’t get a chance to breathe and establish proper pacing. You can imagine the sounds of canned laughter as you read along. There is an abrupt change from frenetic one-liners to serious social statement that is a jarring transition at the end which can leave you unsettled.

How are the boobs? I mean the art? It’s boobs; thousands of them. At first you aren’t sure if these are ironic or satirical knockers either. Although there is no actual nudity the skin tight costumes and gratuitous cheesecake panels from the bad days of comics are rampant. But considering the strong female characters and the almost feminist polemic at the finale you are pretty sure that these are political boobs and not titillating ones. Not just titillating ones. In general the art is very good with a cartoonish realism that is perfect for superheroes yet manages some outstanding nocturnal set pieces and dramatic lighting.

This is a hard one to call as it is almost too enthusiastic and exuberant. Think of Tozzer on speed. Having said that, you can really identify with the real life situations such as dead-end jobs, crazy relationships, and personal insecurity, which are at the core of this work. Thumbs Up!