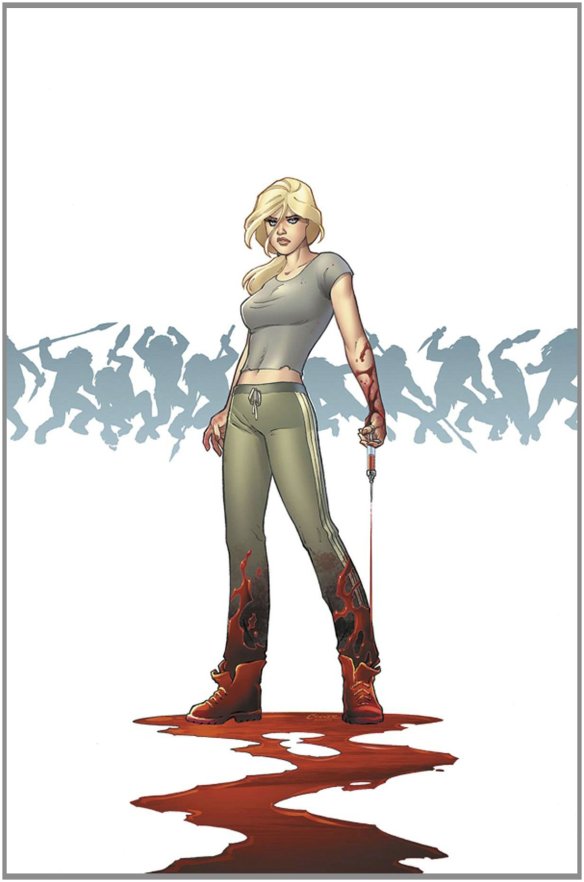 This is a book funded by a Kickstarter. But it isn’t a terrible vanity project as it has names like Palmiotti and Gray behind it. Although as it is distributed by Image it makes you wonder why they couldn’t get the work published the normal way.

It is designed as a graphic novel so there are no enforced cliff-hangers or chapter breaks as single issues would demand. As such it flows very well and at 64 pages really doesn’t outstay its welcome.

It is no War and Peace but there is a tangible and mildly original story there and the female lead gets to sit, uneasily, between rounded character and obligatory T&A scenes.

The art is luscious and detailed with bright colours typical of an Image book. As a Kickstarter backer you wouldn’t be disappointed. It is also a hardcover which, whilst appreciated, seems an unusual way to spend money. You would think more pages might have been the way to go.

All in all a Thumbs Up!

There is just enough content here for a low budget 70’s TV movie. The cringe-worthy pop culture dialogue and movie quotes are assembled into a competent four issue chase scene that would pass the time while getting a rectal exam. The authors have read the first book, or at least the précis, so there is some evidence of continuity but whilst we can accept dinosaurs, giant bees and other huge creatures are poorly chosen.

The biggest problem is putting Shanna’s name on it and expecting it to follow Frank Cho’s female empowering first volume. Unfortunately you could take Shanna out altogether, replace her with a man, or a Satnav and the story would be just the same. There is no character development, merely spectacle, and none of the feminist themes that a book like this should be exploring get a look in. The ending is deeply insulting. If there is any woman lest in need of rescuing or a good snog then it is Shanna.

She was created in the 1970’s by the great Stan Lee as one of several books to appeal to the female reader. It would appear that the ignorant attitudes in this book date from then as there are so many female issues that could have been given valuable discussion in a book like this.

The art is serviceable, and obviously better than most of us can do, but there aren’t the graceful, realistic and emotional portrayals of characters, including Shanna in particular, that Cho dazzled us with. Are those female open leg shots meant to be satirical like Bomb Queen or something more lurid? There is effort and good ideas such as a night vision sequence at the beginning but the busy, scratchy, pencilling and oversized knockers make you shake your head.

You can’t follow Frank Cho’s work and it was suicidal for anyone to try. This is one of those rare travesties, like Union Jack: London Falling, where those who don’t understand the source material are doomed to fail.

For womankind, or humankind, it is my duty to give this a Thumbs Down.