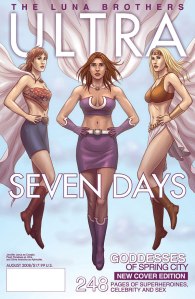 The Luna Brothers gave us “Girls,” an inspired look at womankind. This is another wonderful glimpse into the female psyche told with tenderness and absorbing insight.

This eight issue tale takes its time spinning an enthralling web of love and heartache for its central character. With three female leads and barely a man in sight you get to see a unique story unfold. This isn’t a patronising chick-flick but a clever, funny, emotional rollercoaster that really stands out in the machismo filled world of comics.

The dialogue is superb and you could easily strip out the hero aspect and just have it as three everyday women living their lives. The first issue mentions nothing about heroes and allows us to get to know our heroines as people. The spandex edge does add an extra layer of depth however and brings added spice to this very human tale.

The art is superb, wonderfully capturing the thoughts and feelings of these women. The digital trickery is used sparingly, mostly for motion blur and artificial focus, but there is one genius reflection example fairly early on. There are almost no pure primary hues anywhere in this book. All the colours used are complex blends creating tones that echo the emotional feeling of the scene they illustrate.

Each issue cover is done in the style of a genuine magazine as is the inside cover contents/ credits page. There are also text articles and fake adverts reminding me of the Powers series by Brian Bendis. This book has a lot to say about the media and celebrity and trumpets its message visually and ideologically in a very mature and sophisticated way. Some of the text can get a little small and the prose insertions do slow things down but nothing can spoil this elegant tale.

Boy is this ever a Double Thumbs Up! 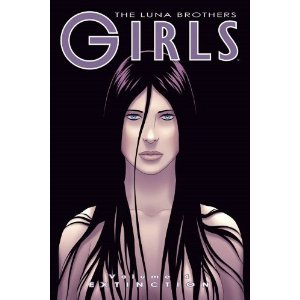 This is a fantastic end to an incredible story. We have had the slow build-up, the tension, the volatile cast and now the whole situation explodes as the testacles hit the fan. If you think things got heated in volume three then this will blow your mind as you really see what happens to people under pressure.

The pace has really sped up from the gentle wisecracking beginning to the run around with your heads cut off finale. This is a shame as the initial humour was part of the charm of this refreshing new work. It does become a bit dialogue heavy towards the end with some hefty speeches to wade through. But where possible the story is told by showing, not by random characters spouting plot. This series has been one of the best at conveying and eliciting emotion through characters expressions, body language and actions. All credit to the Luna Brothers for that.

The story does twist and turn as the balance of power shifts between the sexes but it never feels forced or contrived. Most of the time you are hanging on for dear life as events spiral out of everyone’s control. The ending could have used a few more pages as it seems to be over before you know it but that doesn’t spoil a Double Thumbs Up! 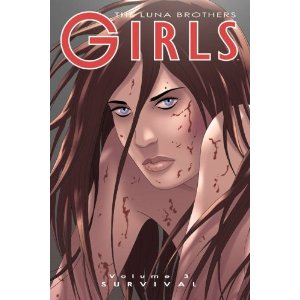 This is the killer volume; the one where it all falls into place. You have your alien menace, your pressure cooker atmosphere causing everyday people to go nuts and you have your dividing line of them and us. Men vs. Women. And it all kicks off in a brutal and nasty way. Normal people pushed too far snapping just as you knew they would.

This is the volume that looks at the big picture of men and women. But it doesn’t express an opinion, offer an answer or tell you anything you didn’t already know. It just reminds you how complex both sexes are and shows us what happens when we don’t tread carefully. These aren’t characters we are watching, they are real people.

There are many neat little touches showing how much thought has gone into this work. What would people really do in this situation? What are their needs? How would the outside world react? All these details have been anticipated and explained. There are no loose ends, dumb choices or gaping plot holes. This work is so highly polished you can see your face in it.

The art is fantastic. Although the figures are basic and minimally detailed the lighting and shadows are superb. There are some great sunrises and twilights. You really get a feel for the quality of light, time of day and even the mood of the scene. There is definitely a photographer’s eye at work here.

This is human drama at its very best, acutely observed and enthrallingly portrayed. Double Thumbs Up! 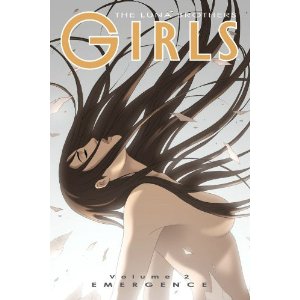 Walking Dead was and is virtually the perfect survival horror story. The only thing it lacked was graphic nudity. Well here we have the answer to what would happen if it did. It isn’t gratuitous and sensationalist either. It is integral to the plot. Girls is possibly the pinnacle of survival horror and chief resurrectionist of the small town B movie.

With the incredible cliff-hanger of the last book there is no doubt that you are going to keep on reading. Rest assured the end of this book is just as gripping as the first. The stakes are rising, the body count is increasing and the Girls are multiplying. And everyone is yelling at everyone else as all the old grudges that fester in a small community boil to the surface.

The art is excellent and you eventually get used to the shifting focus techniques. The digital colouring does allow you to do some neat effects with reflections. Some of the night scenes are a bit dark but that helps add to the sense of confusion and panic that you are watching. There is a great cocktail of characters so you always have someone to laugh at, empathise with, and cheer on.

This is such a killer idea it would be hard (and heartbreaking) to mess it up. But as the story unfolds more layers and depth are added to the mystery of the Girls pulling you deeper and deeper into this work. You really can’t stop now as this truly deserves a Thumbs Up! 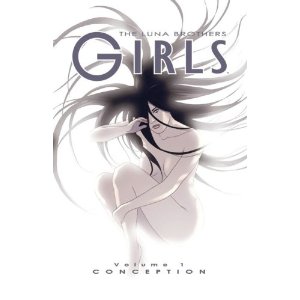 Imagine a zombie film but replace all the zombies with nude beautiful women who are all identical. Make it more like invasion of the body snatchers and less like Benny Hill and you have the wonderfully simple yet unique and intriguing premise for this series.

The setting is a small American town, population 95, in the middle of nowhere. It is populated by a diverse group of people who, for the most part, enjoy the quiet, simple life. We follow Ethan, a twenty-something middle of the road guy, who has made this quaint town his home. One night he finds a naked woman on the highway and takes her home. In the morning more identical naked women have appeared. And then they start to kill…

This is a great idea and it is so different it hooks you in as you want to know where they came from, what they want and what they can do. The tone of the books is like one of the great 50’s B movies or a Stephen King novel. There are a lot of characters in the town but you get a sense that they all have a history and a fully fleshed out back-story. It is fun piecing together the clues as to who these people are and the complex relationships they have with each other. This is an exceptionally well written and well paced work. The characters all behave as they would  – and probably as you would – when confronted with unusual events.

Like Y the Last Man this deals with men and women and their differences. You are waiting for some grand statement or preaching but nothing like that arrives. You just get enough thought provoking story to make you think.

The art is excellent. Full colour realistic drawing but with a minimum amount of detail. The drawing (or more probably inking) is computer assisted leading to some lovely gradients and shading giving a great sense of smooth, flowing, organic shapes in people’s faces and bodies. The frames have also been digitally altered to give the illusion of focus and depth of field giving it a more cinematic feel. This does add more depth to the storytelling and is very good for the “show, don’t tell” rule of comics but it can be jarring. Having a speaking character out of focus is a bold directorial choice but can kick you out of the moment and remind you that you are reading something artificial. At the start of each chapter/ issue is a map of the town and as things happen additional material gets added. This is a neat little touch both to help you get a grip of the town’s layout and who lives where and also to capture that claustrophobic town under siege feeling.

Overall this is such a fresh and rewarding work you can’t help but want more. The ending is such a cliff-hanger, and a truly unexpected one at that, you will definitely be hooked. Nothing less than a Double Thumbs Up!