This is an odd volume. It starts off as the lovechild of Y: The Last Man and Bitch Planet presenting a world where female births stop so women become an endangered gender. It has a dark tone as the world goes to hell in a handbasket in something approaching The Road.

You have a strong female lead and some neat little twists but just as it is getting going you realise the whole thing has either been an advert for, or a cash-in for, a novel series. Literally the last story page is an advert. And then after that you have ten pages previewing a different graphic novel. The whole thing seems blatantly money-grabbing.

The art is fine and the black bordered panels give a sense of menace and jeopardy throughout. It is printed on gloss paper for sharp crisp images.

Disappointing because it could have been so much more. No Thumbs Up!

Well it looks like they dug this up once again. Yet another reboot and another writer. Sadly they got cold feet after just four issues and ended things on a rather inconvenient cliff-hanger.

Who were those bad guys? We will never find out. Not even a theme song or a music video (go look it up) could save this fourth incarnation of the Runaways – sadly.

There are a couple of pages of sketches and a Young Avenger crossover that should have been included in an earlier volume.

The art is the most cartoonish/ Anime. But the lighting and colouring are definitely the boldest we have seen so far.

Well Moore lasted longer than Whedon. But not by much. This tiny four issue volume contains two and half stories. Two and a snake battle truth or dare to be exact. Not even the X-men can save it.

The art has gone from cartoon-ish to full blown cartoon. Definitely not the high quality or detailed work we have seen previously. But the lightness of the style matches the paper thin storylines.

Sadly things are going downhill. After seven books with no new ideas things have become stale. Not even the reappearance of Harry at the end of the last episode can redeem things.

The art style appears to have changed too, becoming less detailed.
There are some nice touches here and there but not the great mystery that still appears in the series title.

There is also another Halloween special but cameos like Constantine just seem like elongated adverts for other books.

Well that was weird. It’s a collection of short stories about a military unit composed of Universal Monsters such as Dracula, the Wolf Man, the Mummy, etc.

Despite being a modern printing it feels more like a 70’s comic with narration describing what is going on in the panel. The humour, and it is supposed to be funny, is largely weak slapstick and puns galore. The kind of thing you would expect in the Dandy or Beano. While reading it you keep thinking you hear the canned laughter from an early Scooby Doo cartoon.

The art is probably digital and insanely garish. It is all colour and there are no outlines or inking visible which is quite a striking style. 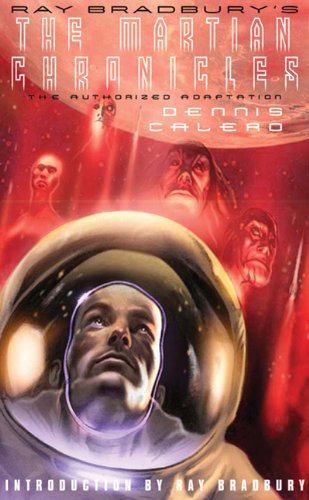 The original work was started in the 1940’s and is a tapestry of short stories which all use the same version of Mars but only a few returning characters. This early example of Sci-fi now appears dry to the modern reader who is more used to space opera.

Whilst some of the poetic language and imagery (which was highly praised by Aldus Huxley at the time) remains, only the ending shows the real impact this commentary on the human condition can deliver. Also excised are the stories about racial tension and religion that would have had a similar profound message. All the stories that take place on Earth have been removed.

The art is very basic and is mostly talking heads with lots of blank backgrounds and thick blocks of dark colours which isn’t how we are used to imagining Mars. This is an illustrated novel rather than a graphic one as none of the storytelling is accomplished by the pictures, they serve merely as a visual soundtrack.

High concept literature such as this is very much tied to the medium it was written in. But if you look at I.N.J Culbard’s H.P Lovecraft works they show that you can pull it off. Even the Rock Hudson TV movie enjoys some success.

What the hell is it? Is it an origin spin-off? A prequel to another book? An issue zero? A pilot?

Here we have four issues which introduce a character and have him fight some existing Valiant heroes, like some 60’s Marvel throwback. This is the kind of preview that Free Comic Book Day was invented for.

Whilst the content isn’t terrible, with thought going into the writing and structure, the purpose of this book with its tiny page count isn’t clear.

The art is fine and there are some superfluous ‘in character’ documents and a designer commentary – which is all about the process and not the purpose.

Like some cheap foreign knockoff this is smaller, thinner and not as good as the original feminist inspired crowd-funded opus. You get the feeling IDW sensed a cash-in opportunity with a new audience and cut as many corners to milk it for all they could.

Some of the stories are just weird mental doodling and some a tableaux of curious ideas. If your goal is to show off the talents of under-represented writers and artists it should be accessible. There are some recognisable names here but you get the feeling they were thrown in to attract publicity. The creator bios are firmly tucked away at the back and there are virtually no links to discover more of their work.

Essentially absent are the essays, interviews and “how to” guides of the previous volume that could encourage and empower potential creators. There is a single biography, which is great, but it cements the case that this is not the wonderful celebration of creativity and ‘art’ that fuelled the original Womanthology.

Because there is no volume two and this ends in mid scene. You will have to go back to the original 1950’s novels.

This story and its author, godfather of space fiction Isaac Asimov, are from a time when sci-fi wasn’t about special effects and explosions and laser guns. It was about philosophy and humanity (ignoring any flying saucers obviously). Even boiled down to a hundred odd pages at two panels per page you still get a sense of the great writing and existential power of this kind of fiction.

This is a compelling mystery as literally nothing is explained to you and your lead character has amnesia so he is no help! There is an inhuman narrator who adds tone and theme (plus more mystery) but this should have been sacrificed to put in more content. If there were 300 or 500 pages more I would definitely read them. But as the story ends abruptly without even a clue to who did it you can’t really judge it fairly.
The art is proper 1950’s Pop Art where everyone seems weirdly frozen mid-emotion. The colour is grey on slightly darker grey and the panels are shrunk and placed on a texture background that takes up a ridiculous amount of the page. And this was produced in 2004.

You can feel there was a really great work there and enough of it survives to truly hook you leaving you frustrated there is no more. There are several pages of text at the end that flesh out an entire world but would only really be relevant to future parts of the story that you never get to.

The art is ok. All the flesh on show benefits from the digital airbrushing but the panel layout tries to be too dynamic resulting in the need for arrows to navigate your way around the page.

The format is also unusual. It is oversize which is handy as you are buying this to squint at the nudity.

The whole work is very brief and does it’s best to entice you into buying volume two. Sadly I wont. No Thumbs!