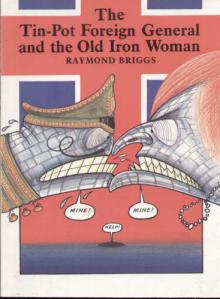 This is about as close to a polemic as Raymond Briggs gets. There isn’t the humour and elegance of “When the Wind Blows,” this is a proper gut-puncher.

It is an anti-war statement that takes the Falklands Conflict as its metaphor but applies equally to all wars. At first it appears to lampoon Thatcher and Galtieri in a very Spitting Image style giving you the impression this could be a children’s book. Then it turns very dark as it deals with the loss of life present in this event. Although focussing slightly more on the British side it makes no judgements on which side was “in the right.”

The art is great, the bold colours and cartoon style making it punchier than most of his other works. A switch to black and white pencils at a key moment really takes you by surprise and you stop laughing as the seriousness of the message hits you.

This could be too adult for younger children despite is clear message but is a definite must for your Briggs collection. 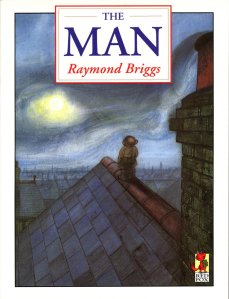 This is an odd story, more grown up and cryptic than many of Briggs’ other works. It concerns a boy who is wakes up to find a tiny little man has decided to come and stay. As the Man is naked and helpless the boy must take care of him. As time goes on the Man becomes increasingly more demanding before departing unexpectedly. But not before leaving some wisdom in his wake.

It isn’t clear what the Man is representing but he is certainly more than just a diminutive visitor. The story is charming on one level as you see a humorous, Odd Couple, relationship develop. But on the other hand the kind of questions the man asks and issues he raises are serious. Is he a metaphor for children, elderly parents, immigration, pets, the infirm or addled? There is no clear answer and whilst this leaves you thinking the lack of resolution can be troubling.

The art is great as you would expect from a Briggs book. There is a lot of dialogue in this work and to stop the long page count getting out of control most of it is presented as a script alongside the pictures. This works just fine and you never get the feeling the two elements are out of balance. 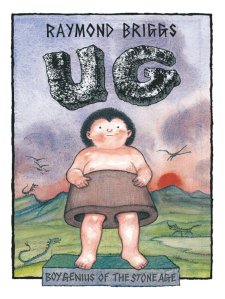 At first reading this is a children’s book all about a Stone Age boy’s longing to have things (like trousers) which aren’t made of stone. Looking deeper it actually tells you a lot about children and adults.

Ug is constantly asking questions which drives his parents mad. His questions make sense to him and to us as a reader living in the future. Ug’s parents have always known a world where everything is made of stone and cannot entertain the notion things could be different. This is a wonderful example of how a child’s mind is much more intuitive and creative than an adult’s. As grownups we are too attached to the status quo and merely dismiss children’s insights as silly.

The art is typical square panels but these are varied in size and layout according to needs of the story. There is a wonderful page where the diagonal of a hill serves as an excellent divider and cleverly stretches over two pages. Day, night, interior and exterior are handled with aplomb by using palette changes and there is a wonderful sunset too.

There is plenty of dialogue with large oversized speech bubbles. These elegantly overlap to clarify the order of speech. There are a lot of footnotes, presented with the frames, which unlike the genius of Fungus the Bogeyman aren’t actually funny. They serve merely to highlight where a modern turn of phrase is used, the origin of which is far in Ug’s future. They prove an unwelcome distraction.
This is an enjoyable read that operates on many levels. 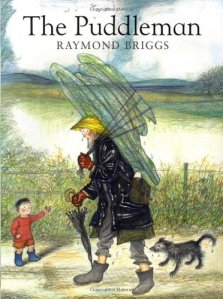 This is less of a graphic novel and more of an illustrated children’s story. In the familiar oversized format this has a low page count, chunky panels and sparing dialogue. It has the wonderful pencils, bright colours and ever present green of the Briggs style.

This is definitely one to delight the younger reader whatever their age. You can tell Briggs is using his own experience with children, and not just from the credits at the back. His observation and understanding of a child’s speech and logic is evident throughout this charming tale.

A brief encounter but one that can’t fail to make you smile. 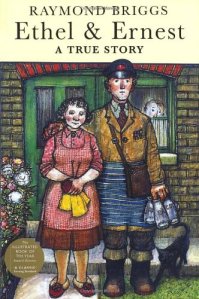 This is a biography of sorts concerning the parents of author and illustrator Raymond Briggs. It follows them from meeting each other to their passing away and all the changes they saw around them in that time. As much as it is their story it chronicles the important events of Britain including the Second World War and the founding of the Welfare State.

Told as a series of vignettes, seldom more than a page or two long, the book is more of a reminiscence than a narrative. All of these tiny fragments blend into a seamless chronological whole. Time passes imperceptibly and you get to know and care for these two people (and their son) as the book progresses.

You smile at the simple pleasures and strange attitudes of your parents or grandparents generation. You see the impact of both war and indoor plumbing and take stock of what is really important in life. Briggs also makes sure he puts some of the key emotional points of his own life in there, possibly as a form of catharsis, or an important record for his future.

The art is superb as with any Briggs book. Great attention is paid to the lettering with special borders for wireless broadcasts and a charming letter from their evacuated son. Long conversations are done in script form so as not to slow down the pictures. You can potentially see Briggs love of the colour green coming from his childhood bathroom. The book ends with a series of full page panels, some of which are mute, adding real gravitas to the closing of this heartfelt work. 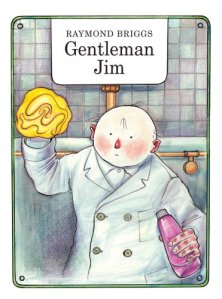 This concerns Jim Bloggs an aging lavatory attendant who dreams of being something else. His Walter Mitty daydreams become increasingly elaborate until one day he decides to become a highwayman.

This is an early Briggs story and can come across as a little unfocused. There is a strong message about the helplessness of the Everyman, and the rise of bureaucracy and those petty individuals that enforce it. The ending is also eyebrow raising compared to many of Briggs’ other works.

The art is a lot richer and more vibrant than many of his more pastel works. The daydreams that spread right across the page are superb showcasing what he is capable of when let out from the customary tiny panel. The authority figures that thwart him are all caricatures in both speech and depiction. The traffic warden is a wonderfully stylised Hitler.

An unusual read in that Jim may exasperate you as much as draw your sympathy. But he and Hilda go on to star in When the Wind Blows and that was magnificent. 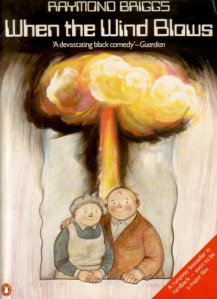 This is a fantastic work by Raymond Briggs who is better known for The Snowman, Father Christmas and Fungus the Bogeyman. This is a much darker tale however and probably not for children. It concerns an elderly couple and what happens to them when a nuclear war breaks out.

They take precautions, follow all the government advice and try to do what is expected of them. They soon discover this is nothing like the last war and blind faith and British pluck are no use to them.

This is a sad and moving tale and a very realistic portrayal of the fear of nuclear war that was palpable in the 1980’s. They are a doddery old couple, set in their ways and a bit fluffy in the head but they are so harmless that you love them. You can easily see your grandparents, aunts and uncles or your future self in them and want nothing bad to happen.

There is a bigger picture here. They are called Mr and Mrs Bloggs and are the ultimate everyman showing you the horrors that would befall you if the unthinkable came. What is most impressive is the introduction. There are quotes from newspapers, media personalities of the time and countless members of parliament (including Tony Benn), a couple of peers and a quote from the Hansard when it was raised in parliament. This shows you the impact it had at the time.

If you are under 30 you won’t know what it was like to live under the shadow of the bomb and may miss out on the resonance of this work. Thanks to the skill of the writer you will however experience the sense of growing dread that overtakes Jim and Hilda Bloggs. The art is excellent matching the author’s other books and embodies the twee and pastel quality of rural England. The panels are quite small for the most part with the odd full page drawing for impact. There are also some clever tricks to illustrate the bomb dropping.

A minute’s silent Thumbs Up.